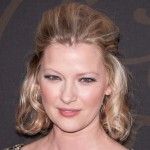 Gretchen Mol was born in Deep River, Connecticut, USA. She is an American actress. She attended The American Musical and Dramatic Academy and graduated from the William Esper Studio. She is known for her roles in the films Rounders, Celebrity, 3:10 to Yuma, The Thirteenth Floor, and The Notorious Bettie Page, where she played the title character. She currently appears as Gillian Darmody in HBO's Boardwalk Empire. Her role in other films include: Girl 6, Sweet and Lowdown, Puccini for Beginners, The Ten, An American Affair, Laggies, True Story, Anesthesia, and Manchester by the Sea. Her role in television include: Girls Club, Life on Mars, and Mozart in the Jungle.