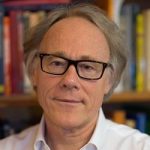 Graham Hancock was born in Edinburgh, Scotland. He is a British author and journalist. He specialises in unconventional theories involving ancient civilisations, stone monuments or megaliths, altered states of consciousness, ancient myths and astronomical/astrological data from the past. He graduated from Durham University in 1973, receiving a First Class Honours degree in sociology. As a journalist, he worked for many British papers, such as The Times, The Sunday Times, The Independent, and The Guardian. He co-edited New Internationalist magazine from 1976 to 1979, and served as the East Africa correspondent of The Economist from 1981 to 1983. He has written several books include: Ethiopia: The Challenge of Hunger, AIDS, the deadly epidemic, Lords of Poverty, The Sign and the Seal, Fingerprints of the Gods, Heaven's mirror, The Mars Mystery, Underworld, Supernatural, Talisman, Entangled, War God, Magicians of the Gods, and Return of the Plumed Serpent.