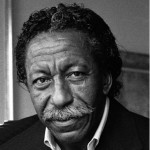 Gordon Parks was born in Fort Scott, Kansas, USA. He was an American photographer, film director, author, and composer. He is best remembered for his iconic photos of poor Americans during the 1940s, for his photographic essays for Life magazine, and as the director of the 1971 film Shaft. He directed other films include: The Learning Tree, Shaft's Big Score, The Super Cops, Thomasine & Bushrod, Leadbelly, and Solomon Northup's Odyssey(TV film). He also performed as a jazz pianist. In 1989, he composed and directed Martin, a ballet dedicated to Martin Luther King, Jr.. He wrote several books include: The Learning Tree, A choice of weapons, Born Black, To smile in autumn, Shannon, Voices in the Mirror, and A Hungry Heart.