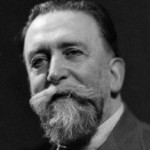 Gordon Bottomley was born in Keighley, England. He was an English poet and playwright, known particularly for his verse dramas. His main influences were the later Victorian Romantic poets, the Pre-Raphaelites and William Morris. In 1944 he was awarded with an honorary Doctor of Letters at the University of Leeds. He wrote several poetry include: The Mickle Drede and Other Verses, Poems at White Nights, The Gate of Smaragdus, Chambers of Imagery, and A Vision of Giorgione. He wrote several plays include: The Crier by Night, Midsummer Eve, The Riding to Lithend, King Lear's Wife, Gruach, Britain's Daughter, Festival Preludes, Lyric Plays, The Acts of St. Peter, and Kate Kennedy.