Showing all quotes
Gordon B. Hinckley (43) 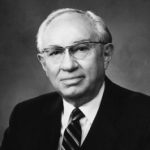 Gordon Bitner Hinckley was born in Salt Lake City, Utah, USA. He was an American religious leader and author who served as the 15th President of The Church of Jesus Christ of Latter-day Saints from March 12, 1995, until his death. Considered a prophet, seer, and revelator by church members, he was the oldest person to preside over the church in its history. Hinckley's presidency was noted for the building of temples, with more than half of existing temples being built under his leadership. He was awarded ten honorary doctorate degrees, and in 2004, he was awarded the Presidential Medal of Freedom by George W. Bush. He also received the Boy Scouts of America's highest award, the Silver Buffalo. He earned a B.A. degree in English from University of Utah in 1932. He wrote several books include: Truth Restored, The Son of God, Standing for Something, Stand a Little Taller, Way to Be!: 9 Rules For Living the Good Life, and One Bright Shining Hope.