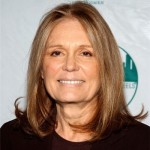 Gloria Marie Steinem was born in Toledo, Ohio, USA. She is an American feminist, journalist, writer, and social and political activist, who became nationally recognized as a leader and a spokeswoman for the feminist movement in the late 1960s and early 1970s. She was a columnist for New York magazine, and a founder of Ms. magazine. In 1969, she published an article, "After Black Power, Women's Liberation," which brought her to national fame as a feminist leader. She has written several  books include: Outrageous acts and everyday rebellions, Marilyn(with George Barris), Revolution from within, Moving Beyond Words, Wonder Woman, Doing Sixty and Seventy, and My Life on the Road.