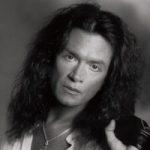 Glenn Hughes was born in Cannock, Staffordshire, England. He is an English rock bassist, vocalist, composer, record producer, singer, and songwriter, best known for playing bass and performing vocals for rock pioneers Trapeze, the Mk. III and IV line-ups of Deep Purple , as well as working with Black Sabbath guitarist Tony Iommi as a solo artist. He fronted the supergroup Black Country Communion from 2009 to 2013 and from late 2013 to early 2015, California Breed.  On 8 April 2016, he was inducted into the Rock and Roll Hall of Fame as a member of Deep Purple. His albums list shown below: Soul Mover, Play Me Out, Building the Machine, Songs in the Key of Rock, First Underground Nuclear Kitchen, Return of Crystal Karma, The Way It Is, Addiction, A Soulful Christmas, Feel, Freak Flag Flyin', Live in Australia, and Talk About It.