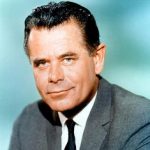 Gwyllyn Samuel Newton "Glenn" Ford was born in Quebec City, Quebec, Canada. He was a Canadian-born American actor. Although he played many different roles, he was best known for playing ordinary men in unusual circumstances. He graduated from Santa Monica High School. His role in several films include: Flight Lieutenant, Gilda, The Lady in Question, A Stolen Life, The Big Heat, Blackboard Jungle, Human Desire, Framed, Experiment in Terror, Jubal, The Fastest Gun Alive, The Secret of Convict Lake, 3:10 to Yuma, Cimarron, The Teahouse of the August Moon, The Gazebo, Cry for Happy, Superman, Happy Birthday to Me, Casablanca Express, Border Shootout, and Raw Nerve. His role in television include: Cade's County, The Family Holvak, and My Town.