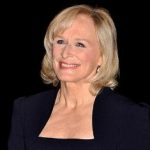 Glenn Close was born in Greenwich, Connecticut, USA. She is an American actress. She has won three Emmy Awards, three Tony Awards and received six Academy Award nominations. Her role in several films include: The World According to Garp, The Big Chill, The Natural, Fatal Attraction, Dangerous Liaisons, Albert Nobbs, Jagged Edge, Hamlet, Reversal of Fortune, 101 Dalmatians, Paradise Road, Air Force One, Cookie's Fortune, Nine Lives, and Guardians of the Galaxy. Her role in TV include: Serving in Silence(TV film), The Lion in Winter(TV film), The Shield(TV series), and Damages(TV series).