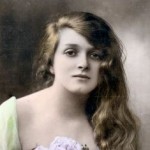 Dame Gladys Constance Cooper was born in Hither Green, London, England. She was an English actress whose career spanned seven decades on stage, in films and on television. Moving to Hollywood in 1940, she found success in a variety of character roles; she was nominated for three Academy Awards, the last one as Mrs. Higgins in My Fair Lady. Her role in several films include: The Real Thing at Last, The Sorrows of Satan, The Bohemian Girl, The Iron Duke, Rebecca, That Hamilton Woman, Eagle Squadron, Mr. Lucky, Princess O'Rourke, Mrs. Parkington, Love Letters, Beware of Pity, Green Dolphin Street, The Secret Garden, Thunder on the Hill, Separate Tables, My Fair Lady, and A Nice Girl Like Me.