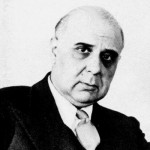 Giorgos or George Seferis was born in Urla, Turkey. He was a Greek poet and diplomat. He continued his studies in Paris from 1918 to 1925, studying law at the Sorbonne. After studying law in Paris, he joined the Greek diplomatic service and served in London and Albania prior to World War II, during which time he was in exile with the free Greek government. Following the war he held posts in Lebanon, Syria, Jordan, and Iraq. He served as Greek ambassador in London from 1957–62. He wrote several books include: Dokimes(Essays), On the Greek style, George Seferis: Collected Poems, Three Secret Poems, Six Nights on the Acropolis, A Levant Journal, Complete Poems, and A Poet's Journal. In 1963, he was awarded the Nobel Prize for Literature "for his eminent lyrical writing, inspired by a deep feeling for the Hellenic world of culture."