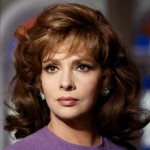 Gina Lollobrigida was born in Subiaco, Italy. She is an Italian actress, photojournalist, and sculptor. Her role in several films include: Black Eagle, Pagliacci, Alarm Bells, A Dog's Life, Four Ways Out, Beauties of the Night, Beat the Devil, Woman of Rome, Trapeze, The Law, Come September, Strange Bedfellows, The Sultans, Bad Man's River, and XXL. In the 1970s, she achieved a scoop by gaining access to Fidel Castro for an exclusive interview. In 2008, she received the NIAF Lifetime Achievement Award at the Foundation's Anniversary Gala. In 2013, she sold her jewelry collection, and donated the nearly $5 million from the sale to benefit stem cell therapy research.