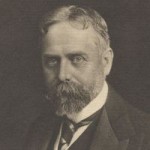 Sir Horatio Gilbert George Parker was born in Camden East, Addington, Ontario, Canada. He was a Canadian-British politician, novelist, poet, short story writer, and teacher. He was educated at Trinity College, University of Toronto. He started as a teacher at the Ontario School for the deaf and dumb in Belleville, Ontario. In 1886 he went to Australia, and for a while became associate editor of the Sydney Morning Herald. In the early nineties he began to gain a growing reputation in London as a writer of romantic fiction. He was elected to the British House of Commons as a Conservative member for Gravesend and remained MP until 1918. He was created a baronet on 21 June 1915 and appointed as a Privy Councillor in 1916. He wrote several novels include: The Seats of the Mighty, The Battle of the Strong, The Trail of the Sword, At the Sign of the Eagle, The Going of the White Swan, John Enderby, The Trespasser, Romany of the Snows, and The World for Sale.