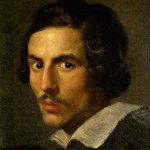 Gian Lorenzo Bernini was born in Naples, Italy. He was an Italian sculptor and architect. A major figure in the world of architecture, he was the leading sculptor of his age, credited with creating the Baroque style of sculpture. As architect and city planner, he designed both secular buildings and churches and chapels, as well as massive works combining both architecture and sculpture, especially elaborate public fountains and funerary monuments and a whole series of temporary structures for funerals and festivals. His selected edifices, Sculptures, and fountains include: St. Peter's Square, David, Apollo and Daphne, Ecstasy of Saint Teresa, Blessed Ludovica Albertoni, Fontana della Barcaccia, Triton Fountain, Fontana delle Api, Fountain of the Four Rivers, and Fontana del Moro.