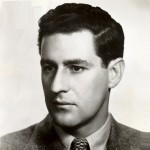 Gian Carlo Menotti was born in Cadegliano-Viconago, Italy. He was an Italian composer and librettist. He began his formal musical training at the Verdi Conservatory, Milan in 1923. He studied composition at Philadelphia's Curtis Institute of Music. He wrote the classic Christmas opera Amahl and the Night Visitors, along with over two dozen other operas intended to appeal to popular taste. He won the Pulitzer Prize twice, for The Consul in 1950 and for The Saint of Bleecker Street in 1955. List of  Menotti's operas: Amelia Goes to the Ball, The Island God, The Medium, Maria Golovin, Labyrinth, The Last Savage, Martin's Lie, Help, Help, the Globolinks!, The Hero, La Loca, and The Boy Who Grew Too Fast.