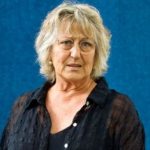 Germaine Greer was born in Melbourne, Australia. She is an Australian writer, regarded as one of the major voices of the second-wave feminist movement in the latter half of the 20th century. She lives in the United Kingdom, where she has held academic positions, specializing in English literature, at the University of Warwick and Newnham College, Cambridge. In 1979, she was appointed director of the Center of the Study of Women's Literature at the University of Tulsa, Oklahoma. In 1998, she served as a Professor of English and Comparative Studies at the University of Warwick. She began writing columns for Oz magazine. As Rose Blight she wrote a gardening column for Private Eye. She was also co-founder and editor of the Amsterdam underground magazine Suck. Her articles for Suck included one entitled "I Am a Whore." She has written several books include: The Female Eunuch, The Obstacle Race, Sex and Destiny, The Change, The Whole Woman, The Beautiful Boy, and White Beech. Her role in several films and TV shows include: Celebrity Big Brother(TV show), Town Bloody Hall(Documentary), Nice Time(TV Program), and Universal Soldier(film).