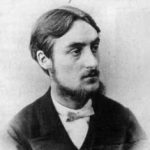 Gerard Manley Hopkins was born in Stratford, Essex, England. He was an English poet and priest. His manipulation of prosody and his use of imagery established him after his death as an innovative writer of religious verse. He studied classics At Balliol College, Oxford. Ordained to the priesthood in 1877, he served as missioner, occasional preacher, and parish priest in various Jesuit churches and institutions in London, Oxford, Liverpool, and Glasgow. He taught Greek and Latin at Mount St Mary's College, Sheffield, and Stonyhurst College, Lancashire. In 1884 he became professor of Greek and Latin at University College Dublin. His selected poems including Binsey Poplars, Pied Beauty, The Windhover, The Wreck of the Deutschland, As Kingfishers Catch Fire, God's Grandeur, and Spring and Fall.