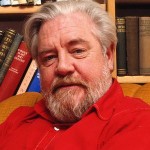 Gerald "Gerry" Malcolm Durrell was born in Jamshedpur, British India. He was a British naturalist, zookeeper, conservationist, author, and television presenter. He founded what are now called the Durrell Wildlife Conservation Trust and the Durrell Wildlife Park on the Channel Island of Jersey in 1959, but is perhaps best remembered for writing a number of books based on his life as an animal collector and enthusiast. He wrote several books include: My Family and Other Animals, The Drunken Forest, Encounters with animals, A Zoo in My Luggage, Look at zoos, My favourite animal stories, Rosy Is My Relative(novel), Birds, Beasts, and Relatives, Fillets of Plaice, Beasts in my belfry, The Talking Parcel(novel), Golden Bats and Pink Pigeons, The Garden of the Gods, The Mockery Bird(novel), The Amateur Naturalist, The Fantastic Dinosaur Adventure(novel), The Fantastic Flying Journey(novel), Toby the Tortoise, The Aye-Aye and I, and The Corfu Trilogy.