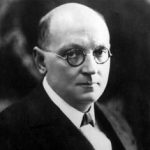 Georges Duhamel was born in Paris, France. He was a French novelist, poet, playwright, short story writer, and physician. In 1920, he published Confession de minuit, the first of a series featuring the anti-hero Salavin. In 1935, he was elected as a member of the French Academy. In 1937, he was elected to the French National Academy of Medicine. He wrote several novels include: Le Notaire du Havre, Life and Adventures of Salavin, and Chronicle Pasquier. He wrote several poetry include: Des légendes, des batailles, L’homme en tête, Selon ma loi, Compagnons, and Elégies. He wrote several plays include: In the shadow of statues and The work of the athletes. He wrote two short-story collections include: The New Book of Martyrs and Civilisation 1914–1917( won the Prix Goncourt prize in 1918).