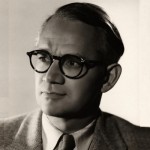 George Woodcock was born in Winnipeg, Manitoba, Canada. He was a Canadian travel writer, critic, essayist, editor, historian, playwright, and poet. In 1959 he was the founding editor of the journal Canadian Literature which was the first academic journal specifically dedicated to Canadian writing. He is most commonly known outside of Canada for his book Anarchism: A History of Libertarian Ideas and Movements. He wrote biographies of Pierre-Joseph Proudhon, William Godwin, Oscar Wilde, and Peter Kropotkin. He wrote several books include: Faces of India: A Travel Narrative, The Crystal Spirit(won a Governor General's Award for English-language non-fiction), Into Tibet, Mohandas Gandhi, Canada and the Canadians, South sea journey, 100 great Canadians, Caves in the Desert, A Social History of Canada, Tolstoy at Yasnaya Polyana(poems), Anarchism and Anarchists(Essays), and The Cherry Tree on Cherry Street(Poems). He wrote two plays include:  The Island of Demons and Six Dry Cakes for the Hunted.