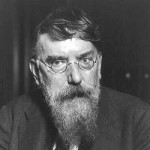 George William Russell was born in Lurgan, County Armagh, Northern Ireland. He was an Irish novelist, editor, critic, poet, and painter. He used the pseudonym "AE", or more properly, "Æ". He was also a writer on mysticism, and a central personage in the group of devotees of theosophy which met in Dublin for many years. He was educated at Rathmines School and the Metropolitan School of Art, where he began a lifelong friendship with William Butler Yeats. He was editor of the Irish Homestead, the journal of the IAOS from 1905 to 1923. He wrote several Poetry include: Homeward Songs by the Way, The Earth Breath and Other Poems, The Nuts of Knowledge, By Still Waters, Voices of the Stones, and The House of Titans and Other Poems. He wrote two novels include: The Interpreters and The Avatars.