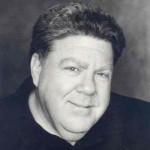 George Robert Wendt III was born in Chicago, Illinois, USA. He is an American actor, best known for the role of Norm Peterson on the television show Cheers. He graduated with a B.A. in economics at Rockhurst College in Kansas City, Missouri. His role in several films include: My Bodyguard, Dreamscape, Fletch, House, Guilty by Suspicion, Forever Young, Hostage for a Day, Space Truckers, The Lovemaster, King of the Ants and Edmond. His role in television include: Taxi, Santa Baby, Santa Buddies, Kirstie, and Clipped.