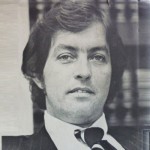 George V. Higgins was born in Brockton, Massachusetts, USA. He was an American novelist, lawyer, columnist, and professor. He is best known for his bestselling crime novels. He received an M.A. degree from Stanford University in 1965 and a law degree from Boston College in 1967. He worked as a deputy assistant attorney general for the Commonwealth. He wrote for the Associated Press, the Boston Globe, the Boston Herald American, and the Wall Street Journal. He was a professor at Boston College and Boston University. He wrote several novels include: The Friends of Eddie Coyle, Cogan's Trade, A City on a Hill, Kennedy for the defense, The Rat on Fire, Imposters, Trust, Defending Billy Ryan, and At end of day.