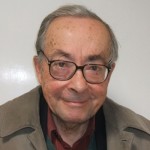 Francis George Steiner was born in Paris, France. He is a French-born American literary critic, essayist, author, and professor. He has written extensively about the relationship between language, literature and society, and the impact of the Holocaust. He obtained a B.A. degree from University of Chicago in 1948. He earned a M.A. degree from Harvard University in 1950. He received his Ph.D. from Balliol College, University of Oxford in 1955. He was Professor of English and Comparative Literature at the University of Geneva from 1974–94, Professor of Comparative Literature and Fellow at the University of Oxford from 1994–95, and Professor of Poetry at Harvard University from 2001–02. He has written several books include: Tolstoy or Dostoevsky(essay), Anno Domini(short stories), Language and Silence(essays), The Death of Tragedy, In Bluebeard's Castle, After Babel, The Portage to San Cristobal of A.H.(novella), Proofs and Three Parables, No Passion Spent(essays), The Deeps of the Sea, Errata(memoir), Grammars of Creation, and Lessons of the Masters.