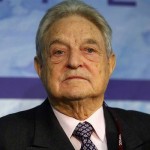 George Soros was born in Budapest, Hungary. He is a Hungarian-American businessman, investor, and philanthropist. He is chairman of Soros Fund Management. He is a well known supporter of American progressive and American liberal political causes. Between 1979 and 2015 he donated more than $11 billion to various philanthropic causes. He is also the chairman of the Open Society Foundations. In 1947, he immigrated to UK and became a student at the London School of Economics. In 1951, he earned a B.Sc. degree in philosophy and an M.Sc. degree in philosophy in 1954, both from the London School of Economics. In 1956, he moved to New York City, where he worked as an arbitrage trader for F.M. Mayer. He has written several books include: The Alchemy of Finance, Opening the Soviet System, The Crisis of Global Capitalism, Open Society: Reforming Global Capitalism, George Soros on Globalization, The Bubble of American Supremacy, The Age of Fallibility, Financial Turmoil in Europe and the United States, and The Tragedy of the European Union.