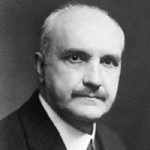 George Santayana was born in Madrid, Spain. He was a Spanish philosopher, poet, and novelist. Originally from Spain, he was raised and educated in the United States from the age of eight. He is popularly known for aphorisms, such as "Those who cannot remember the past are condemned to repeat it," "Only the dead have seen the end of war," and the definition of beauty as "pleasure objectified". After graduating from Harvard in 1886, he studied for two years in Berlin. From 1896 to 1897, he studied at King's College, Cambridge. He earned a Ph.D. from Harvard University and served as a full time professor of philosophy at Harvard University from 1907-1912. He wrote several books include: The Sense of Beauty, Sonnets and Other Verses(poetry), The Life of Reason, Egotism in German Philosophy, Scepticism and Animal Faith, The Realms of Being, and The Last Puritan(novel).