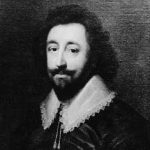 George Sandys was born in Bishopsthorpe, near York, Yorkshire, England. He was an English poet and traveller. He studied at St Mary Hall, Oxford. On his travels, which began in 1610, he first visited France; from north Italy he passed by way of Venice to Constantinople, and thence to Egypt, Mt. Sinai, Palestine, Cyprus, Sicily, Naples and Rome. A complete narrative of his travels, A Relation of a Journey Begun an. Dom. 1610 was published in 1615 and was dedicated to Prince Charles. He also took great interest in the earliest English colonization in America. In 1621–25 he was treasurer and director of industry and agriculture in the American colony of Virginia. Prior to leaving for Virginia in 1621, he had published a verse translation of the first five books of Ovid’s Metamorphoses. He published several religious works, including Paraphrase upon the Psalmes, an expanded second edition of Psalmes, a translation of Hugo Grotius’ Christus patiens, and A Paraphrase of the Song of Solomon.