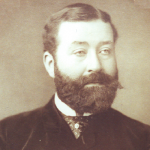 George Robert Sims was born in Kennington, London, England. He was an English journalist, poet, playwright, and novelist. He began writing lively humour and satiric pieces for Fun magazine. He was also a very successful dramatist, writing numerous plays, often in collaboration, several of which had long runs and international success. He was educated at the University of Bonn. He completed his studies in Germany and France. He was editor of One and All in 1879 and for various papers wrote about horse racing, showing dogs, boxing, and leisure. Although he published his "Mustard and Cress" column every week for 45 years. He wrote several novels include: How the Poor Live and Rogues and Vagabonds. He wrote several plays include: Crutch and Toothpick, Master and Man, The Lights o' London, and Dandy Dick Whittington. A modern edition of his poetry, Prepare to Shed Them Now, was published in 1968. His autobiography, My Life: Sixty Years' Recollections of Bohemian London became very popular.