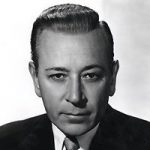 George Raft was born in Hell's Kitchen, New York City, New York, USA. He was an American film actor and dancer identified with portrayals of gangsters in crime melodramas of the 1930s and 1940s. A stylish leading man in dozens of movies, today Raft is mostly known for his gangster roles in the original Scarface, Each Dawn I Die, Some Like it Hot, and as a dancer in Bolero. He had a great success as a dancer in London in 1926. His role in several films include: Night After Night, The Bowery, If I Had a Million, Limehouse Blues, The Glass Key, Souls at Sea, Spawn of the North, They Drive by Night, Invisible Stripes, Manpower, Broadway, Background to Danger, Follow the Boys, Johnny Angel, Mr. Ace, Outpost in Morocco, Red Light, A Bullet for Joey, The Ladies Man, Five Golden Dragons, Skidoo, Hammersmith Is Out, and The Man with Bogart's Face.