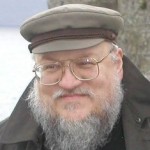 George R.R. Martin was born in Bayonne, New Jersey, USA. He is an American novelist, short-story writer, screenwriter, and television producer. He is best known for his international bestselling series of epic fantasy novels, A Song of Ice and Fire, which was later adapted into the HBO dramatic series Game of Thrones. He has written several novels include: Dying of the Light, Fevre Dream, The Armageddon Rag, Tuf Voyaging, A Game of Thrones, A Clash of Kings, A Storm of Swords, A Feast for Crows, A Dance With Dragons, The Ice Dragon, and The Winds of Winter. He has written several short story collections include: A Song for Lya, Songs of Stars and Shadows, Sandkings, Songs the Dead Men Sing, Nightflyers, Portraits of His Children, and Quartet. He worked as a TV writer include: The Twilight Zone, Beauty and the Beast, and Doorways(producer).