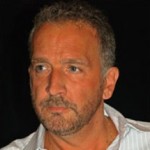 George P. Pelecanos was born in Washington, D.C., USA. He is an American crime novelist, TV producer, and TV writer. He worked in television include: The Wire(producer, writer), Treme(Executive producer), and The Pacific(Co-producer, writer). He has written several novels include: The Night Gardener(won Barry Award for Best Novel), Hard Revolution, Nick's Trip, Right as Rain, Soul Circus, The Big Blowdown, Hell to Pay(won Gumshoe Award for Best Mystery), A Firing Offense, Shame the Devil, Shoedog, Drama City, The Turnaround(won Hammett Prize), and The Double.