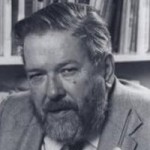 George Parkin Grant was born in Toronto, Canada. He was a Canadian philosopher and professor. He is best known for his Canadian nationalism, political conservatism, and his views on technology, pacifism and Christian faith. Academically, his writings express a complex meditation on the great books, and confrontation with the great thinkers, of Western Civilization. He earned a B.A. degree in history at Queen's University in 1940. He earned a Ph.D. in theology at Balliol College, Oxford University. He served as a professor at Dalhousie University and McMaster University. He wrote several books include: The Empire, Yes or No?, Two theological languages, Philosophy in the Mass Age, Lament for a Nation, Time as History, Technology and Empire, English-Speaking Justice, and Technology and Justice.