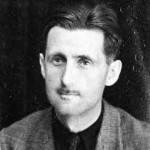 Eric Arthur Blair who used the pen name George Orwell was born in Motihari, Bengal Presidency, British India. He was an English novelist, essayist, journalist, and critic. He wrote literary criticism, fiction, nonfiction, and polemical journalism. He wrote several novels include: Burmese Days, A Clergyman's Daughter, Keep the Aspidistra Flying, Coming Up for Air, and  Nineteen Eighty-Four. His nonfiction works include: Down and Out in Paris and London, The Road to Wigan Pier, and Homage to Catalonia. He wrote one novella include: Animal Farm. He wrote several essays include: Politics and the English Language, Why I Write, A Hanging, Such, Such Were the Joys, and England Your England.