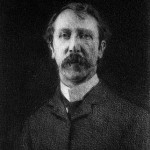 George Augustus Moore was born in Moore Hall, County Mayo, Ireland. He was an Irish novelist, poet, art critic, memoirist, and playwright. He originally wanted to be a painter, and studied art in Paris during the 1870s. He wrote several novels include: A Modern Lover, A Mummers Wife, A Drama in Muslin, Spring Days, Mike Fletcher, Vain Fortune, Esther Waters, Celibates, Evelyn Innes, Sister Theresa, The Untilled Field, The Lake, Hail and Farewell, Muslin, The Brook Kerith, Lewis Seymour and Some Women, Ulick and Soracha, and Aphrodite in Aulis. He wrote several poetry books include: The Flowers of Passion, Pagan Poems, and Pure Poetry. He wrote several memoirs include: Confessions of a Young Man, Memoirs of My Dead Life, and A Communication to My Friends. He wrote several plays include: The Strike at Arlingford, The Bending of the Bough, The Apostle, Elizabeth Cooper, The Making of an Immortal, and The Passing of the Essenes.