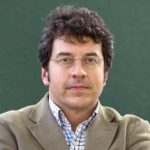 George Joshua Richard Monbiot was born in Paddington, London, England. He is a British author, journalist, environmental and political activist who writes a weekly column for The Guardian newspaper. He studied at Brasenose College, Oxford. After graduating in Zoology, he joined the BBC Natural History Unit as a radio producer, making natural history and environmental programmes. Working as an investigative journalist, he travelled in Indonesia, Brazil, and East Africa. He has written several books include: Heat, Captive State, Feral, The Age of Consent, Manifesto for a new world order, Amazon Watershed, Bring on the Apocalypse, No Man's Land, Poisoned Arrows, and Anti-capitalism.