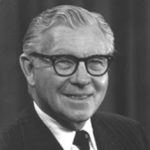 George Lloyd Murphy was born in New Haven, Connecticut, USA. He was an American dancer, actor, and politician. He was educated at Trinity-Pawling School, Peddie School and Yale University. He was the president of the Screen Actors Guild from 1944 to 1946, and was awarded an honorary Academy Award in 1951. He served from 1965 to 1971 as U.S. Senator from California. He is the only United States Senator represented by a star on the Hollywood Walk of Fame. His role in several films include: Broadway Melody of 1938, Broadway Melody of 1940, For Me and My Gal, Jealousy, Woman Trap, Little Miss Broadway, The Mayor of 44th Street, Bataan, The Powers Girl, Show Business, Big City, and Talk About a Stranger.