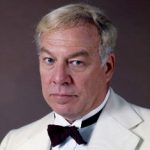 George Harris Kennedy, Jr. was born in New York City, New York, USA. He was an American actor who appeared in more than 200 film and television productions. He is best remembered for portraying "Dragline" opposite Paul Newman in Cool Hand Luke, for which he won the Academy Award for Best Supporting Actor and was nominated for the corresponding Golden Globe. He received a second Golden Globe nomination for portraying Joe Patroni in Airport. His role in several films include: Lonely Are the Brave, Island of the Blue Dolphins, Strait-Jacket, The Flight of the Phoenix, The Pink Jungle, Lost Horizon, Earthquake, Brass Target, Modern Romance, The Delta Force, The Terror Within, Sands of Oblivion, The Man Who Came Back, Another Happy Day, and The Gambler.