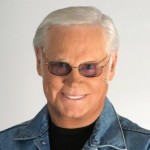 George Glenn Jones was born in Saratoga, Texas, USA. He was an American singer and songwriter who achieved international fame for his long list of hit records, including his most well known song "He Stopped Loving Her Today", as well as his distinctive voice and phrasing. In 1959, he released a cover version of "White Lightning" by J. P. Richardson, which launched his career as a singer. His albums list shown below: 50 Years of Hits, The Grand Tour, Wine Colored Roses, 16 Biggest Hits, Still the Same Ole Me, The Bradley Barn Sessions, First Time Live, Old Brush Arbors, High-Tech Redneck, Walls Can Fall, In a Gospel Way, George Jones with Love, I'm a People, and What's in Our Heart.