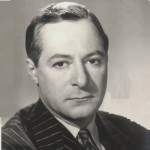 George Albert Jessel was born in New York City, New York, USA. He was an American actor, author, comedian, singer, songwriter, and Academy Award-winning movie producer. He was famous in his lifetime as a multitalented comedic entertainer, achieving a level of recognition that transcended his limited roles in movies. He co-wrote the lyrics for a hit tune, "Oh How I Laugh When I Think How I Cried About You," and performed in several successful comedy stage shows in the early 1920s. In 1921 he recorded a hit single, "The Toastmaster."His role in several films include: The Other Man's Wife, Private Izzy Murphy, Sailor Izzy Murphy, Ginsberg the Great, and Lucky Boy. He wrote three volumes of memoirs, So Help Me, This Way, Miss and The World I Lived In. He was widely known by his nickname, the "Toastmaster General of the United States."