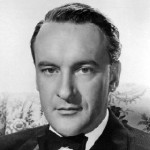 George Henry Sanders was born in Saint Petersburg, Russia. He was an English film and television actor, singer-songwriter, and music composer. His career as an actor spanned more than 40 years. His role in several films include: Lloyd's of London, Rebecca, Foreign Correspondent, All About Eve( won an Academy Award for Best Supporting Actor), King Richard and the Crusaders, Moonfleet, While the City Sleeps, The Jungle Book(voice), The Girl from Rio, The Best House in London, The Kremlin Letter, Doomwatch, Endless Night, and Psychomania. In 1958 he recorded an album called The George Sanders Touch: Songs for the Lovely Lady. His singing voice can be heard in Call Me Madam. During the production of The Jungle Book he refused to provide the singing voice for his character Shere Khan during the final recording of the song, "That's What Friends Are For".