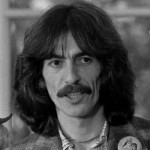 George Harrison was born in Liverpool, England. He was an English guitarist, musician, singer, songwriter, and film producer who achieved international fame as the lead guitarist of the Beatles. His songs for the group included "Taxman", "Within You Without You", "While My Guitar Gently Weeps", "Here Comes the Sun" and "Something". His albums list shown below: All Things Must Pass, Cloud Nine, Dark Horse, Brainwashed, Living in the Material World, Somewhere in England, Wonderwall Music, Thirty Three & 1/3, George Harrison, Gone Troppo, and Left Alone With My Heart. He served as executive producer for 23 films with HandMade, including Mona Lisa, Shanghai Surprise, and Withnail and I. He was posthumously honoured with The Recording Academy's Grammy Lifetime Achievement Award at the Grammy Awards in February 2015.