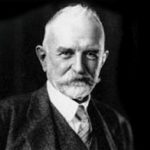 George Herbert Mead was born in South Hadley, Massachusetts, USA. He was an American philosopher, sociologist, and psychologist, primarily affiliated with the University of Chicago, where he was one of several distinguished pragmatists. He is regarded as one of the founders of social psychology and of what has come to be referred to as the Chicago sociological tradition. He graduated with a BA degree at Oberlin College, in 1883. In autumn 1887, he enrolled at Harvard University, where his main interests were philosophy and psychology. In 1888, he left Harvard after receiving only a B.A. and moved to Leipzig, Germany to study with psychologist Wilhelm Wundt, from whom he learned the concept of "the gesture," a concept central to his later work. He wrote several books include: The philosophy of the present(novel), George Herbert Mead on Social Psychology, Movements of Thought in the Nineteenth Century, Play, school, and society, and The individual and the social self.