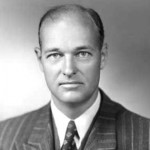 George Frost Kennan was born in Milwaukee, Wisconsin, USA. He was an American diplomat, political scientist, and historian. After receiving his bachelor's degree in 1925, he passed U.S. Foreign Service. He gained his first job as a vice consul in Geneva, Switzerland. Within a year he was transferred to a post in Hamburg, Germany. In 1929, he began his program on history, politics, culture, and the Russian language at the University of Berlin's Oriental Institute. He served United States Ambassador to the Soviet Union and Yugoslavia. He was known best as an advocate of a policy of containment of Soviet expansion during the Cold War on which he later reversed himself. He lectured widely and wrote scholarly histories of the relations between USSR and the United States. He was also one of the group of foreign policy elders known as "The Wise Men". During his career, he wrote seventeen books and scores of articles on international relations. He won the Pulitzer Prize for History, the National Book Award for Nonfiction, the Bancroft Prize, and the Francis Parkman Prize for Russia Leaves the War, published during 1956.