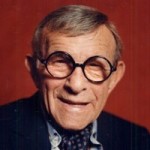 George Burns was born in New York City, New York, USA. He was an American comedian, actor, and writer. When Burns was 79, he had a sudden career revival as an amiable, beloved and unusually active comedy elder statesman in the 1975 film The Sunshine Boys, for which he won the Academy Award for Best Supporting Actor. His role in several films include: The Big Broadcast, International House, Six of a Kind, A Damsel in Distress, College Swing, Honolulu, The Solid Gold Cadillac, Oh, God!, Going in Style, and Oh, God! Book II. He wrote several books include: Gracie: A Love Story, 100 Years, 100 Stories, How To Live To Be 100 – Or More, Wisdom of the 90's, and Living It Up.