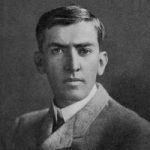 George Ade was born in Kentland, Indiana, USA. He was an American writer, newspaper columnist, and playwright. He earned a BS degree from Purdue University in 1887. In 1890 he joined the Chicago Morning News, which later became the Chicago Record, where McCutcheon was working. He wrote the column, Stories of the Streets and of the Town. Ade's well-known "fables in slang" also made their first appearance in this popular column. He wrote several books include: Artie, Pink Marsh, Forty modern fables, The slim princess, The girl proposition, Knocking The Neighbors, and Bang! Bang!. He wrote several plays include: The Sultan of Sulu, The County Chairman, Peggy from Paris, The Sho-Gun, and The College Widow.