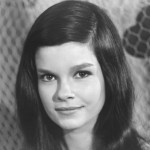 Genevieve Bujold was born in Montreal, Quebec, Canada. She is a Canadian actress best known for her portrayal of Anne Boleyn in the 1969 film Anne of the Thousand Days, for which she won a Golden Globe Award for best actress and was nominated for an Academy Award. Her role in several films include: The War Is Over, King of Hearts, Isabel, The Trojan Women, Journey, The Last Flight of Noah's Ark, Tightrope, The Moderns, False Identity, Oh, What a Night, Last Night, The Trotsky, and Chorus.