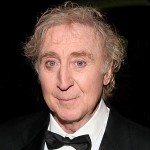 Jerome Silberman, known professionally as Gene Wilder was born in Milwaukee, Wisconsin, USA. He is an American stage and screen comic actor, author, screenwriter, and film director. His first major role was as Leopold Bloom in the 1968 film The Producers for which he was nominated for an Academy Award for Best Supporting Actor. His role in several films include: Bonnie and Clyde, Blazing Saddles, Young Frankenstein, Silver Streak, Stir Crazy, Another You, and The Woman in Red. He directed several films include: The World's Greatest Lover, The Woman in Red, and Haunted Honeymoon. He has written several films include: The World's Greatest Lover, The Woman in Red, Haunted Honeymoon, and See No Evil, Hear No Evil. He has written several books include: Kiss Me Like a Stranger: My Search for Love and Art(memoir), What Is This Thing Called Love?, My French Whore(novel), The Woman Who Wouldn't, and Something to Remember You By.