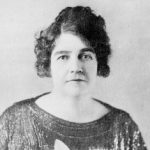 Gene Stratton-Porter was born in Lagro, Indiana, USA. She was an American novelist, naturalist, nature photographer, and one of the first women to form a movie studio and production company, Gene Stratton-Porter Productions, Inc. She wrote several best-selling novels and well-received columns in national magazines, such as McCall's. Her novel A Girl of the Limberlost was adapted four times as a film, most recently in 1990 in a made-for-TV version. In addition to writing works of natural history, she became a wildlife photographer, specializing in the birds and moths in the Limberlost Swamp, one of the last of the wetlands of the lower Great Lakes Basin. She wrote several novels include: The Song of the Cardinal, Freckle, At the Foot of the Rainbow, A Girl of the Limberlost, The Harvester, Michael O'Halloran, A Daughter of the Land, The White Flag, The Keeper of the Bees, and The Magic Garden.