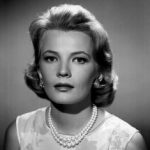 Virginia Cathryn "Gena" Rowlands was born in Madison, Wisconsin, USA. She is an American actress of film, stage and television. The four-time Emmy and two-time Golden Globe winner is best known for her collaborations with her actor-director husband John Cassavetes in ten films, in two of which, Gloria and A Woman Under the Influence, she gave Academy Award-nominated performances. In November 2015, she received an Honorary Academy Award in recognition of her unique screen performances. Her role in several films include: The High Cost of Loving, Lonely Are the Brave, A Child Is Waiting, Opening Night(won the Silver Bear for Best Actress Award), Love Streams, Something to Talk About, The Neon Bible, Hope Floats, Playing by Heart, The Notebook, The Skeleton Key, Yellow, and Parts per Billion.