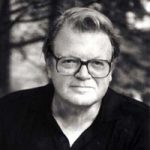 Garry Wills was born in Atlanta, Georgia, USA. He is a prolific Pulitzer Prize–winning American author, journalist, and historian, specializing in American history, politics, and religion, especially the history of the Catholic Church. He became a faculty member of the history department at Northwestern University in 1980, where he is currently an Emeritus Professor of History. He earned a B.A. in philosophy from Saint Louis University in 1957 and an M.A. from Xavier University in 1958, both in philosophy. He received a Ph.D. in classics from Yale University in 1961, and taught history at Johns Hopkins University from 1962 to 1980. He has written several books include: Lincoln at Gettysburg, What Jesus meant, Why I am a Catholic, Nixon agonistes, Papal sin, A Necessary Evil, What Paul Meant, Certain trumpets, John Wayne's America, The Kennedy imprisonment, Witches and Jesuits, and Bare ruined choirs.